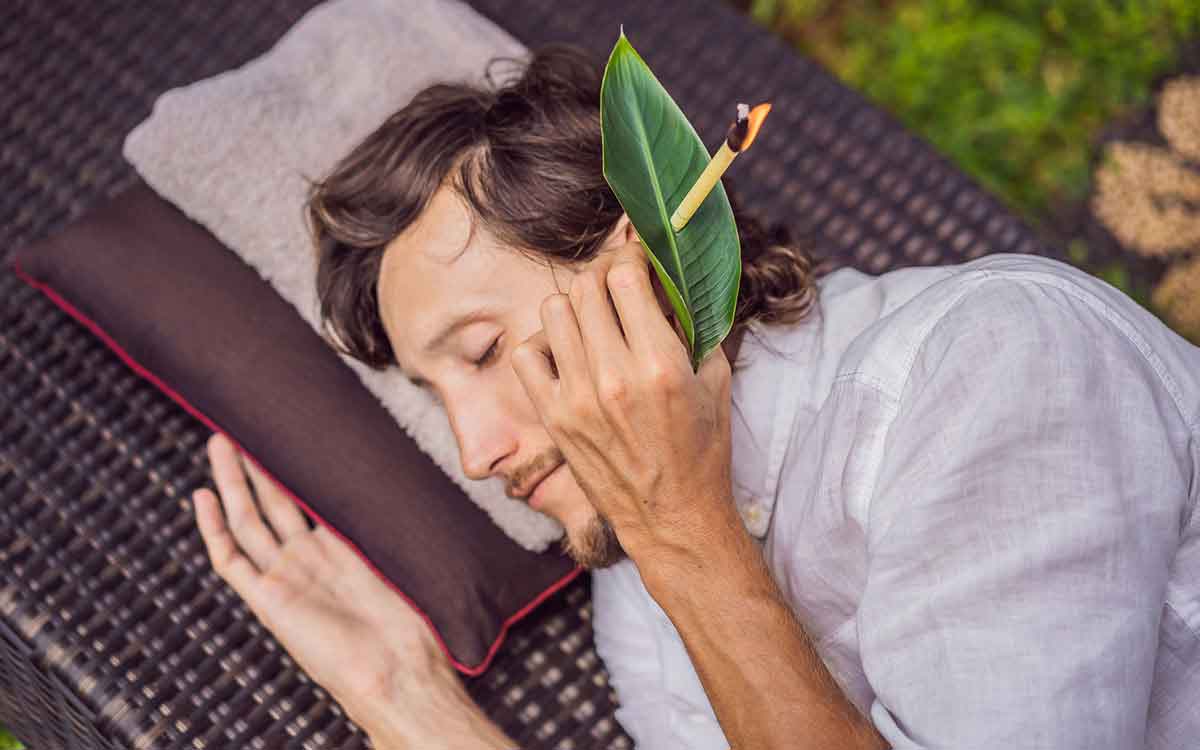 If you saw your partner sticking a candle in his ear you might… start to question some things. It’s not a great look, candles sticking out of your ears (whether you’re holding them or someone else is). But there’s a persistent belief in some circles that a practice called “ear candling” is a good way to minimize your earwax.

Spoiler alert: No. No, they don’t.

Why then, does this bit of psuedo-science keep burrowing its way into the heads of otherwise rational human beings? It’s difficult to say with much precision. But the more you know about earwax candling–including the risks involved–the more likely you can make an informed choice (even if the rational decision is pretty clear).

What Is Earwax Candling?

So here’s the basic setup: Maybe you have too much earwax and you’re not quite sure how to get rid of it. You know you’re not supposed to use cotton swabs (which is good–cotton swabs are not a great way to clean out your ears, generally speaking). So you start looking for an alternative and come across this technique called earwax candling.

Here’s how earwax candling supposedly works: By sticking a candle in your ear (wick side out), you create a pressure differential. The wax in your ear, then, is pulled outward, towards the freedom of the open world. In theory, the pressure differential is enough to break up any wax that might be log-jamming in your ear. But this dangerous practice is not a good way to clean your ears.

Now, the candles used in these “procedures” are supposed to be special. When you’re done with your fifteen minutes of ear candling, you can break apart the candle and, in the hollow, see all bacteria, debris, and wax that had previously been in your ear. The only problem is that the same detritus shows up in both burned and unburned candles. So this “proof” is actually nonsense.

Scientific research has been unable to prove any benefit associated with earwax candling.

So It Doesn’t Work… But Is Earwax Candling Safe?

What’s the harm in trying, right? Well… any time you get hot candle wax around your ears, you’re asking for trouble. Look, it’s very possible that you might try ear candling and walk away completely unscathed. Plenty of people do. But that doesn’t mean there aren’t risks involved–and it certainly doesn’t mean that ear candling is safe.

The negative impacts of ear candling can include:

You Don’t Need a Candle to Keep Your Ears Clean

Most people will never truly have to worry about cleaning earwax out of their ears. That’s because your ears themselves are actually pretty good about cleaning themselves! However, there are some people who will have unusually heavy earwax production or buildup to contend with.

If you do need to clean out your ears because of excessive wax, there are scientifically-proven (and effective) ways to do that safely. You could use a fluid wash, for example. Or you could see a professional who will be able to use specialized tools to get excess wax or wax blockages out of the way.

You should continue to avoid cotton swabs. And you should also avoid using an open flame to clean out earwax. Earwax candling doesn’t work–and it can create risks that will put your comfort and your hearing in significant jeopardy. So maybe it’s time to put those special candles away.

Protect Your Hearing With… Drugs?
This Common Condition Is Associated with Depressio...
Is it Because of the Speech Banana?
Reversing Hearing Loss? New Research Shows Promise
Common Causes of Ear Blockages