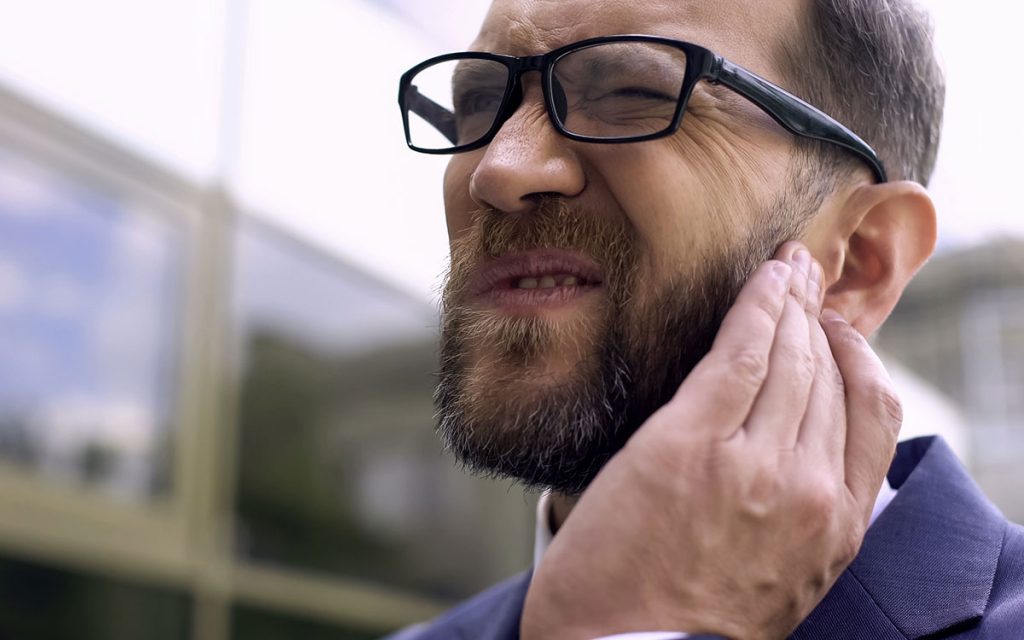 When cartoon characters have a hard time hearing, the solution is often simple: a pinky finger. A good swipe through the ear takes out all that wax (or water or whatever) and, suddenly, the world is alive with sound again. Of course, cartoon logic doesn’t always apply to real life–and you probably should not take life lessons about hygiene from cartoons.

But you’d be forgiven for wondering if earwax really can lead to hearing loss. And you’ve probably had one or more instances where the world sounds a little muffled and you stick your finger in your ear hoping to clear things up.

The Truth About Earwax and Hearing Loss

Excess earwax can indeed cause hearing loss. But it’s not exactly common. Your ears are pretty good at what they do–they need only a tiny opening in the outer ear for sound to travel into the ear canal and become part of your auditory experience. So in order for earwax to cause significant hearing loss, you have to have a significant amount of blockage.

And there are usually ample warning signs before it gets to that point. Earwax, in most cases, is not a fast-moving problem–it builds up slowly. So that means you’ll likely be experiencing discomfort or feelings of “fullness” in your ear long before your hearing takes a hit.

This Could Contribute to Earwax Issues

Despite repeated cautions, there are still plenty of people who feel that taking a cotton swab to your ears is the best way to clean them (it’s not).

And so, day by day, you’re packing in that earwax with your cotton swabs–and you can’t figure out why your ears feel full because you think you’re doing the right things to keep them clean. Bad habits could compound problems with earwax compression and, eventually, cause some temporary hearing loss.

In most cases, however, earwax isn’t the main culprit of conductive hearing loss (that’s the fancy term for hearing loss caused by some kind of obstruction), but rather it can contribute to other hearing problems. This can happen in several ways:

Earwax can cause blockages: Just because sound can get through doesn’t mean everything else can. In order to function properly, your ears need to be able to drain (just think about how much water gets in your ears every time you shower). In some cases, earwax can make it difficult for your ears to do that, and the fluid that gets trapped in your ears can cause issues with your hearing.

Ear infections: Earwax is pretty useful when it comes to keeping your ears healthy. In the right amounts, earwax is good for you! But when that system gets out of whack (for any number of reasons), you can increase your risk for ear infections. If earwax causes blockages and prevents draining, you could be looking at more serious ear infections–and those infections could cause temporary hearing loss or even (in the most serious cases) permanent hearing damage

One of the common ways that earwax buildup can harm your hearing is, well, user error: you feel the wax buildup and attempt to correct it yourself. The cotton swab you reach for, though, will only make the problem worse.

Get Rid of Earwax the Right Way

In most cases, the best way to get rid of earwax is, really, to leave it alone. Your ears are self-cleaning when it comes to earwax. The exception is for people who either have unusually dense earwax (earwax that’s been packed down over time) or unusually plentiful earwax.

In those cases, there are some home remedies you could try like drops or ear irrigation kits, but it might also be a good idea to check with a specialist. A hearing specialist will be able to help you clean your ears in the right way, protecting your hearing in the process.

In cases where earwax is causing hearing loss, removing that earwax is usually the most straightforward solution. Once any blockage is resolved, your hearing should return to normal. But your ears have to be cleaned the right way–so avoid the cartoon character solution and see a real live hearing specialist instead.